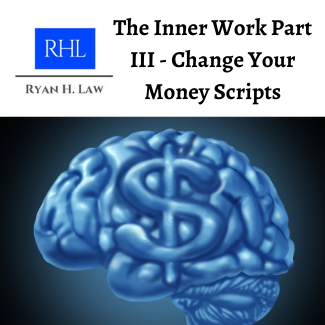 This is the third in a series about changing how we think and feel about money.
You can find the other parts here:

In this post, we are going to look at some ideas for how you can change destructive Money Scripts.

Discovering your Money Scripts, which was discussed in Part II of this series, helps us know what Scripts we have, and like the old G.I. Joe commercials said, “Knowing is half the battle.”

Changing a Money Script can be challenging – after all, these Scripts have been with us for a long time. They are like a well-worn path in our brain.

Once you identify your Money Scripts you can start to examine them.

I like to look at each Money Script and ask the following 7 Examination Questions:

Let’s run through an example. Let’s say that I have a Money Script that I never have enough money.

This new Money Script can become an affirmation. It may help to put it on a sticky note on a mirror and read it multiple times throughout the day.

When I am feeling like there isn’t enough money I can interrupt my thought process and say, “I experience financial abundance in my life. Money flows freely to and through me.”

This may not initially feel true – after all, I am trying to undo a long-standing belief, but I can change my mindset, which will eventually change my thoughts, and ultimately my behavior.

This can be an extremely valuable experience to go through. Today’s Action Step will help you to do that.

After you do this for your own Money Scripts, you can help your clients do the same.