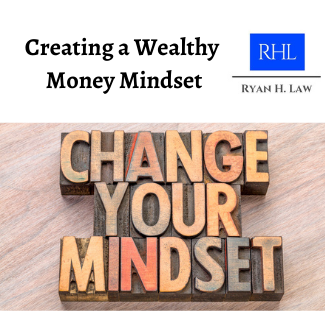 You are here: Home / Habits / Creating a Wealthy Money Mindset

I was reading a story recently about a lottery winner who said he was worse off several years after winning.

He had been robbed several times, he was declaring bankruptcy, his marriage had fallen apart, and he was alienated from his kids.

He said that he wished he had never won.

It reminded me of a documentary I watched in a class when I was at Iowa State. The documentary makers gave a homeless man some money (I think it was around $20,000) then followed him around with a camera.

At first he enjoyed the money and the things that it could buy, but within a month he was said that his life was so much worse and he wished he hadn’t accepted their money.

We’ve all read stories about former professional athletes who made millions of dollars a year, but are now broke and working a minimum wage job, or the person who inherited money and blew it in 6 months.

How is this possible? How do you win, inherit, or earn millions of dollars, and blow it in a few years? How is your life worse after winning all that money? Why is “sudden money” a bad thing for most people?

I believe the answer is simple – they haven’t developed a wealthy money mindset.

In 1955 Jim Rohn was broke and hopeless as he worked as s Sears stock clerk. He attended a seminar taught by the man who would become his mentor, Earl Shoaff, and decided he would learn everything he could from him.

At one point Earl said to Jim, “Set a goal to become a millionaire for what it makes of you to achieve it. Do it for the skills you have to learn and the person you have to become.”

Jim Rohn found out along the way that he would need to learn about the marketplace, time management, working with people, risk, storytelling, business, government, taxes, speaking in front of groups, communication skills, and more. He learned about these things, and when he passed away he had a net worth of over $500 million5.

One of Jim Rohn’s most common messages was the same as Earl Shoaff’s message:

Jim Rohn and countless other wealthy people learned about the marketplace, and taxes, and communication and other skills along the way. They learn the skills needed to make and retain their wealth. They sometimes lose everything, but use the skills they learned to come back even stronger.

Those who get “sudden money” (athletes, inheritances, lottery winners) haven’t learned what they need to about all the areas Jim Rohn talks about. They don’t have millionaire habits or thoughts. It is unlikely that they know about taxes and how to protect that money. They aren’t familiar with what type of investments would work best for them with their newfound wealth.

That knowledge can, of course, be learned, and some people who get sudden money do learn, but I think most people are going to be better off if they learn it along the way.

If you or your clients want to do what Jim Rohn and Earl Shoaff recommended and become a millionaire “for what it makes of you to achieve it,” the first step is to learn about how wealthy people think and act. Pick several habits or ways of thinking that you can focus on. Here are some starting points:

I believe that wealth is more about a person’s mindset than having a certain amount of money.

(1) Lottery Winner Statistics: 23 Eye-Popping Facts
(2) One in three Americans who get an inheritance blow it
(3) 70% of Rich Families Lose Their Wealth by the Second Generation
(4) How Athletes Go Bankrupt at an Alarming Rate
(5) 10 Famous Motivational Speakers & Their Net Worth