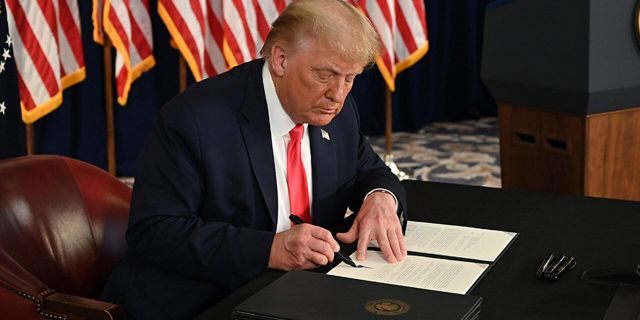 There is a question of the legality, as federal spending is a power reserved for Congress, and they could be stopped by a court order, but so far Democrats have not proposed that, as negotiations for another stimulus package have stalled, and they are unlikely to stop the additional unemployment amount given under the orders.

This article will be updated as more information becomes available.

The CARES Act deferred payments and interest on Federal Direct student loans until September 30, 2020. This memorandum offers further deferral until December 31, 2020. The memorandum specifies that those who want to can continue to make payments.

We don’t know yet if this continued deferral will be automatic (it most likely will be), and whether the skipped payments will count towards forgiveness programs, such as Public Service Loan Forgiveness (PSLF).

Under the CARES Act those who are unemployed received their state benefit plus $600 a week, fully funded by the federal government. However, that $600 extra per week ended in late July. This memorandum provides $400 extra per week, ending no later than December 27, 2020.

What we don’t know is what will happen if the states don’t have the funds, as many states have already said they don’t. Will the unemployed get an extra $300? We also don’t know when the extra $400 per week will start.

This is a deferral only, and the tax will be due in the future, most likely with April 2021 taxes.

The major criticisms of this memorandum is that is does not help the unemployed, and that it will have to be paid back. It is also extremely unpopular among both Republicans and Democrats. If Congress decides to extend it, they will have to decide how much to reduce it and how long it will last.

If the deferral is the full employee portion of the payroll tax (7.65%) someone earning $40,000 year will get approximately $255 extra on their monthly paycheck, while someone earning $100,000 will get approximately $637 extra per month. Again, though, this is simply a delayed tax, not a cancellation. My concern is that people will spend that money and not be able to pay it back when it becomes due.

Chances are, if Congress chooses to include this in their bill, that they will cancel the collection of the tax, but nothing is sure yet.

President Trump has tied this directly to his re-election, stating that if he is re-elected he will make the deferral permanent and that it will not have to be paid back. Presidents, however, do not have this authority, so it would take an act of Congress to enact this.

If this is upheld, we don’t know whether that $104,000 is for single or married borrowers, and there is no word on whether or not there will be a deferral of the employer portion (it is unlikely that there would be a deferral of that portion).

The CARES Act moratorium on certain evictions and foreclosures expired on July 31, which could start a wave of people losing their homes or rental. With unemployment still high the concern is that a loss of housing will spread the Coronavirus faster if people end up in homeless shelters or in a crowded multi-family home.

This Executive Order, however, does not really stop either evictions or foreclosures. It simply directs the Secretary of the Treasury and the Secretary of Housing and Urban Development to identify Federal funds to provide temporary financial assistance to renters and homeowners who are struggling to meet their monthly or mortgage obligations.

Basically this order says these groups need to look into it and try to figure out how to help. Measures mentioned in the order may include, “encouraging and providing assistance to public housing authorities, affordable housing owners, landlords, and recipients of Federal grant funds in minimizing evictions and foreclosures.”

We don’t know what will come of this – it could be a full moratorium, or a partial one. If there is direct money we don’t know if funds may be provided directly to landlords or to tenants to pay their landlords.