You are here: Home / Uncategorized / How to Set and Achieve Your Goals 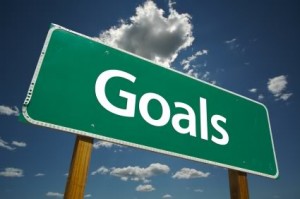 Successful entrepreneur, author and public speaker Jim Rohn tells a story about meeting his boss and mentor, Earl Shoaff, for breakfast early in his career to discuss success. Shoaff suggested they start by reviewing Rohn’s list of written goals.

“I don’t have them with me,” Rohn responded.

Surprised, Shoaff asked, “Well are they out in your car?”

Hesitatingly Rohn responded, “Well…no…when I say I don’t have them with me, I mean that I don’t have a written list of goals at all.”

“Then,” Shoaff responded, “I know exactly where we need to start.”

Jim Rohn became an avid goal setter and credits it as one of the key principles behind his success, and he isn’t alone. Many other successful people credit goal setting with their success as well.

To be honest, I’ve known about goal setting for years, but I haven’t been great at actually writing them down and tracking my progress. Most people are similar. The average American sets the same resolution ten years in a row unsuccessfully, and most resolutions are abandoned within four months.

I’m working on changing some of my habits, though, and setting goals is a great place to begin.

I’ve been doing some research and want to share with you some thoughts on how to set and achieve your goals.

“I thought this was a personal finance blog, not personal development” you might be thinking. It is! Setting clear, concrete, specific financial goals is one of the keys to success in your personal finances. Goals gives you a reason to budget and to say “no” now because you are focused on what you want to achieve long-term. Also, personal development is one of my favorite topics to study, so as I learn things I will continue to share them here. I hope you find it helpful.

Let’s get to it, then. Here are the seven steps to successful goal setting and achievement[i].

Step One: Get specific

Many of us have vague goals in mind, such as, “I would really like to lose some weight,” or “I would love to be financially successful.” This is a good start, but it doesn’t answer a key question: How will you know when you have reached your goal? In other words, what does success look like?

“I would like to lose fifteen pounds” is much better than “I want to lose some weight.” After all, if you go down by a pound you have technically achieved your goal of losing some weight, but that isn’t what success really meant.

Step Two: Decide when you are going to act

Setting and achieving a goal requires you to change your behavior in some way. To lose weight you need to eat healthier and exercise. To be successful financially you need to start budgeting, paying off debt, and saving for the future. The most successful goal setters realize that behavior change is hard, though, and they set up a plan for when they are going to do the new action (such as exercise or budget).

They do this with a specific technique called if-then planning. If they have a goal to exercise regularly, they get specific about when to act by saying, “If it is 7 AM, then I will work out for 30 minutes.”

This concept has been tested over and over. For example, there was a group of people who all said they wanted to exercise regularly. The first group was taught about if-then planning and they collectively agreed that, “If it is Monday, Wednesday or Friday, then I will hit the gym for 30 minutes before work.”

Group two had no specific plan for when to act.

When we decide we want to achieve a goal we usually get excited and want to jump in the deep end. For some people, this might work, but the majority of people are going to sink. Research has shown that taking really small steps can be the best way to achieve a goal. Robert Maurer, author of “One Small Step Can Change Your Life” tells a story about a girl named Julie who needed to lose weight and get her blood pressure down. He was tempted to tell her to exercise aerobically for 30 minutes every day, but he knew from experience that while the advice was good, she was unlikely to do it and would just feel misunderstood and guilty.

Maurer decided to try something different. “How about if you just march in place in front of the television, each day, for one minute?” Julie responded that of course she could do that. After all, there was no way she couldn’t succeed.

Was she going to get healthier exercising for a minute a day? Probably not. What happened the next week, though, was that Julie came back excited that she had achieved her goal. Together they built up the exercise habit, minute by minute, for a few months, until she started exercising for 30 minutes each day.

If you set really small steps towards your goal you will achieve success over time. The steps should be so small that you are guaranteed success.

This can be easily incorporated with if-then planning:

“If it is a commercial break during this show then I will march in place during one commercial.”

“If it is noon I will go on a five-minute walk.”

“If I am getting home from work I will spend five minutes connecting with my spouse.”

“If it is after dinner I will play with my kids for three minutes.”

Honest and regular monitoring, and preferably reporting your progress to someone else, will help you improve.

Different goals will have different monitoring periods, but monitoring weekly is a good step for most goals. “Did I stick to my budget this week” or, “did I hit the gym three times?” or, “what is my current weight?” are all great weekly questions to ask. Remember that early on the goal should be much smaller. Did you march in place during one commercial break each night? Did you read one verse of scripture each day?

For most people, behavior change is hard. Believe in yourself, but be realistic about obstacles you are going to face.

Step Six: Focus on getting better, rather than being perfect

My seven-year old son is playing coach-pitch baseball this year, so he goes to practice each week and he and I play catch and practice batting. Do I expect him to be perfect – to hit every ball and throw every ball perfectly? Of course not! Is he getting better, though? Absolutely. He and I both recognize that is the goal – to get better.

It is important to remember that you are developing ability and learning to master a new skill. A smoker, for example, may have the goal to quit smoking. If he has been smoking 20 cigarettes a day but has cut down to 10 has he failed? No! He is getting better and that should be celebrated.

Most goals have one thing in common – resisting temptation, and you need willpower to resist those temptation.

Willpower, however, varies from moment to moment, and gets depleted with use. Willpower is like a muscle – it needs time to bounce back, but it does get stronger over time.

Making and keeping commitments to yourself is one of the best ways to strengthen your willpower muscle. If you commit to get up at a certain time, do it! If you commit to track your spending every day, do it! Don’t commit to do something unless you are going to keep it. Making a commitment to yourself and then breaking it will weaken that muscle. For this reason you shouldn’t take on two challenging goals at once.

Here are the seven steps again:

I encourage you to take some time this week to set some goals using these steps. I commit to do this.

[i] I have gathered this material from a number of sources, but I am a fan of using research to back things up, rather than anecdotal evidence. Two books that I have really enjoyed are “9 Things Successful People Do Differently” by Heidi Grant Halvorson and “One Small Step Can Change Your Life” by Robert Maurer. “The Compound Effect” by Darren Hardy is a great follow-up to these books.