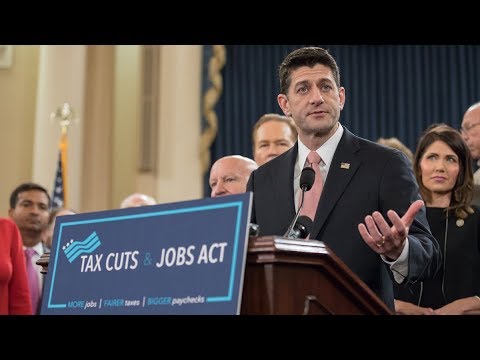 You are here: Home / National Economic issues / The Republican tax bill – a burden to families, homeowners, and students

DECEMBER 18, 2017 UPDATE: This bill, and therefore this article, are now irrelevant as the Senate also passed a bill, then a committee was formed to reconcile the two bills. For an analysis of the revised bill, read https://ryanhlaw.com/revised-tax-cuts-jobs-act/.

Important note: I am not a CPA or tax attorney and I don’t play one on TV. My explanations and descriptions of the proposed changes to the tax code are simplified (which is the goal of this blog). Nothing contained here should be construed as tax advice. I also want to note that I am a Conservative, and I am firmly against this bill.

In early November, 2017, the Republican party released their version of tax reform. You can find the full text of the tax code here: https://waysandmeansforms.house.gov/uploadedfiles/bill_text.pdf. Most people agree that the tax code needs some simplification and that some loopholes need to be closed. While there are a few positive aspects of the bill, the bill, as a whole, is a disaster and should not be passed.  Let’s start with the positive aspects of the proposed bill:

Now for the negatives:

This tax bill is terrible and should not be passed. However, remember that this bill is not a law yet! I encourage you to contact your elected officials and encourage them to scrap this bill entirely. You can find contact information here:

Call them, e-mail them, post on their social media pages. Let them know you don’t support this bill.

I conclude with two quotes:

“This is a Republican plan that targets people wanting to adopt children, homeowners, small businesses and people with high medical bills.” – Carol Markowitz[v]

“If the goal of the new tax plan is to shift the tax burden from wealthy, older Americans onto young, already-indebted students pursuing their higher education dreams, it’s poised to be a smashing success.” – Ethan Siegel[vi]

END NOTE: If you are looking for a comprehensive review of the GOP tax bill you can find that here: https://www.kitces.com/blog/tax-cuts-and-jobs-act-2018-house-gop-tax-reform-proposal/

[i] In Los Angeles county, for example, 23% of mortgages are over $500,000. In San Francisco that number jumps to 56.6%. http://www.latimes.com/visuals/graphics/la-na-g-mortgage-interest-deduction-tax-calculator-20171106-htmlstory.html