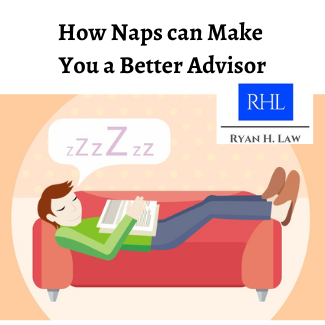 You are here: Home / Habits / How Naps Can Make You a Better Advisor

Last week we looked at the increased health benefits that can be achieved by sleeping better. 7-8 hours a night is ideal.

In doing research for sleeping, I came across a number of articles and studies about naps. It turns out that naps, along with a great sleep schedule, have a number of additional benefits.

When I was in a training center for new missionaries we had long, grueling schedules. We would get 30 minute breaks in the morning and afternoon, and we often went to the classroom next door (which was empty) and flipped the chairs over so the soft headrest was on the ground. We would lay on those and nap for 20 minutes before we had to go back to class. Getting a little rest restored our energy and focus.

More businesses recognize and set up places for employees to nap, including:

Dr. Sara Mednick, author of Take a Nap! Change Your Life has done extensive research on the power of naps.

In her book she lists 20 reasons why napping is a good idea. She says that napping can make you smarter, healthier, and more productive. People who nap make better decisions, have more energy, and gain numerous health benefits. She also points out the ALL mammals, except humans, nap. If you have a dog or a cat you see how much they nap during the day!

NASA has also done extensive studies on sleeping and naps. NASA studies have found that napping improves working memory, increases alertness by 54% and increases job performance by 34%1. No wonder so many businesses are incorporating the power of naps into their workplaces!

In this article we’ll cover how long the perfect nap is, when the right time to nap is, and how can you make your office more nap friendly.

How Long the Perfect Nap is

The research varies a bit on this, but most researchers agree that an ideal nap is between 15-25 minutes.

NASA says 10-20 minutes is ideal2 and anything longer can lead to sleep inertia, or feeling “foggy” after waking up.

Dr. Mednick recommends 20 minutes naps, but the occasional “perfect nap.” A perfect nap is a full 90 minutes, which takes a person through all the sleep cycles.

For most busy professionals, 20 minutes is ideal. I do love a good “perfect nap” on an occasional Sunday, though!

Most researchers recommend after lunch and before 3 PM. Basically an earlier nap gets you through the afternoon heat and afternoon lull, and prepares you to finish up the day strong.

Dr. Mednick recommends you nap 6 hours after waking up3.

How You Can Make Your Office More Nap Friendly

If you are a large firm or have a large space, consider nap rooms, like they have at the Huffington Post or Mattress Firm4.

You can also opt for a “nap pod” if you have some space and money for one. Facebook, Google, and other companies have “nap pods” available5.

If you don’t have the space or money for a room or pods, provide couches in quiet or secluded spots and allow, or encourage, employees to take a nap when they need to. Some people will simply nap in their cars during a lunch break.

Brett McCay on the Art of Manliness said that he got through law school by renting a carrel in the library and putting a pillow and blanket under it. He would simply lie down on the ground and nap when he needed to. “It was awesome. It was nice and dark underneath my desk and because it was in the library, it was quiet. Those short little naps allowed me to power through hours of classes, reading, and outlining6.”

If you are in charge, encourage your employees to do this. If you are not in charge, show your boss this article, then look for spots that you can take a 20-minute power nap.

Try it out! Take at least one “power nap” this week.

(1) Here’s why napping is good for you, according to science
NASA-supported sleep researchers are learning new and surprising things about naps
(2) NASA just researched the perfect midday nap
(3) A Sleep Researcher’s 4 Scientific Ways To Nap Better
(4) ‘The Huffington Post’ Office Has Nap Rooms—Jealous?
POWER NAP ON THE JOB: MATTRESS FIRM’S NEW HQ
(5) Asleep on the Job
(6) Unleash the Power of the Nap