You are here: Home / Book Reviews / How Rich People Think 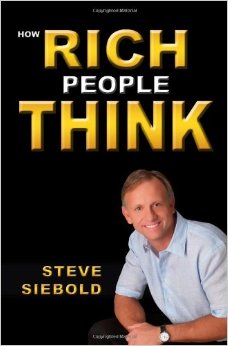 I recently picked up a copy of the book How Rich People Think[i] by Steve Siebold. In the book Siebold shares 100 lessons he learned over a period of 26 years as he interviewed some of the wealthiest people in the world. The book reminds me of a few of my other favorite finance books, including The Millionaire Next Door and Think and Grow Rich. These books don’t focus on money per se, but how rich people think and act.

“The average person believes the harder they work the more money they’ll make. Their linear thinking equates labor and effort with financial success. This is why most people aren’t rich. They’re following an outdated model of success…The rich know that creative thinking is the highest paid skill in the world.”

This idea of creative thinking is a theme throughout the book. Siebold mentions numerous times that the best thing you can do is work on training your mind to find solutions to difficult problems. “The rich get richer,” Siebold says, “because they know the world is overflowing with wealth disguised as problems that need to be solved.” One way he recommends you train your mind is by investing at least one hour per day studying subjects that will help you move toward your vision.

Surely you have heard the philosophy that you should “do what you love and the money will follow.” Do you believe that is true? On the last day of my class each semester I ask the question “How many of you truly believe you can do something you love and get paid well for it?” Most students raise their hands, but the reality is that most people don’t like what they do. Forbes reported on a study that showed that only 19% are satisfied with the work they do, 16% are somewhat satisfied and almost 2/3 of all people are dissatisfied, or unhappy in the work they do.[ii]

There is a great video narrated by Alan Watts called “What is Money Was No Object?” that discusses this theme. Here is a link to the video: http://www.youtube.com/watch?v=C_sbcSRMsOc

Siebold says that “…passion is the real secret of getting rich…The rich go to work every day feeling passion for what they do, and their passion fuels their efforts.”

What is your major money goal? Siebold says “…the masses major goal with money is to retire at 65 and hopefully have enough money to survive until they die. The world class, while often no more ambitious, set their sights on impacting the world with their wealth.”

Most people want to make a positive impact on the world. Think about some specific things you could do to make a difference for other people if you had the money to do it.

Jim Rohn, a famous speaker, author and consultant tells a story of meeting with his mentor, Earl Shoaff, for the first time. Shoaff said, “Let’s start with reviewing your goals.” Rohn said he didn’t have them with him so Shoaff said “Are they in your car? Why don’t you go get them so we can review them.” Rohn said they weren’t in his car and in fact he didn’t have any written goals. Shoaff then drilled into Rohn’s head the importance of having goals, and Rohn went on to equate this one principle with the majority of his success.

Siebold says only 3% of people have goals specific enough to generate the level of mental energy required for success, while “World-class thinkers focus on the single most important goal they desire and set a deadline for its achievement…Their do or die commitment to building a financial empire virtually guarantees their success.”

Here are a few of Siebold’s other lessons. World class…

I encourage you to read books like this that challenge your thinking. You may not agree with everything Siebold or other authors like him say, but I believe it is a healthy thing to read things like this and seek for ways to improve your thinking.