You are here: Home / Goals / What I Learned from my Dishwasher about the Power of Focus 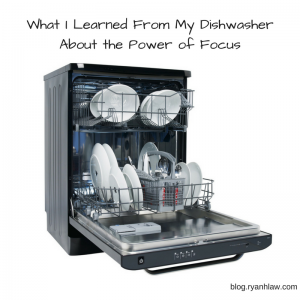 We run our dishwasher each night and one of the kids empties it in the morning. A while back we decided we wanted to leave our dishwasher open a bit during the day to let it air out. Our children decided to make it a game to see how long we could go before someone shut it all the way, which turned off the green “clean” light on the front.

The next day the same thing happened and since then we’ve only closed it all the way during the day a time or two.

Now clearly this is a minor thing and this post is not about the virtues of leaving your dishwasher open a bit[1]. As the title of the article says, it is about the power of focus. This experience with the dishwasher got me thinking about how we were able to change a habit and achieve a goal by focusing.

How can you use this idea to achieve on your major goals? Focus on them. Here are some ideas:

Just as the Proverb says, “As a man thinketh in his heart, so is he” (Prov 23:7), or as Buddha said, “The mind is everything. What you think, you become” or Emerson, “You become what you think about all day long.”

Focus on and think about your goals and you will eventually achieve them.

[1] It turns out this is a good practice, though: http://homeguides.sfgate.com/keep-dishwasher-building-up-mold-61036.html