You are here: Home / Goals / Changing for Good

Are there areas of your life that you want to change? Do you want to lose weight, get in shape, stop a bad habit or start a good habit? None of these things are going to happen by chance. They are only going to happen if you make a decision to change. In my last post I talked about goals – I want to dig deeper today into how you actually make the changes in your life that you want to make and how goal setting fits in to this.

Back in the early 90’s three researchers – James Prochaska, Carlo DiClemente and John Norcross wanted to know the answer to the question: “How did people make changes in their lives?” They were expecting to find some common denominators among those who had made changes and maintained them. What they ended up finding, though, was a model that they called Stages of Change.

In this post I am going to walk you through the five Stages of Change and discuss some ways you can incorporate them to make a positive changes in your life.

The first stage is Precontemplation. In this stage you don’t know that you have a problem. It’s the alcoholic that says “I don’t have a drinking problem – I can stop anytime I want” or the person who is in the early stages of heart disease due to their lifestyle but isn’t aware of it. For those in the precontemplation stage there is no intention to change their behavior. They may wish to change, but this is different from intending to change.

The second stage is Contemplation. In this stage they are aware that a problem exists, but they haven’t taken any steps to overcome it. They are contemplating changing sometime in the next six months, but research has shown that people will contemplate changing for years before actually doing anything about it.

Preparation is the next stage. Those in this stage intend to change their behavior in the next 30 days. They may have already taken some small steps, such as purchasing running shoes.

Preparation is where goal setting kicks in. If you want to stop eating sugar, for example, but you are still in the contemplation stage then setting a goal isn’t going to help – in fact, it can be harmful because you aren’t going to keep your commitment. If you are ready to commit, though, and you are ready to make a change in the next 30 days, then use my last post (https://ryanhlaw.com/how-to-set-and-achieve-your-goals/) to set your goals!

Action is the stage where you take decisive action. You actually go running, you throw away all your cigarettes or take any other action that exhibits positive behavior. You enter the action stage on day one and stay in this stage for six consecutive months. That means that if a smoker, for example, goes three months without a cigarette then smokes one on a stressful day, then quits again, they start this stage back over.

The final stage is Maintenance. Those in this stage have changed their behavior for at least six months. This stage was originally called Termination but was modified to reflect that maintenance is not static – it is a continuation of change. For example – at Alcoholics Anonymous meetings everyone introduces themselves as an Alcoholic, even if they have been dry for years. They recognize that they need to maintain the change.

I differ from the authors in only one regard. Action is seen as the step where you completely stop or start doing something. You completely quit smoking, or you exercise for 30 minutes every day, or you completely cut out sugar, or whatever the action is.

For many people (myself included) that’s too overwhelming. Smaller changes, where you are guaranteed not to fail, have proven to be more effective. I’ll give you an example from my own life. I would like to be better at studying the scriptures. My ultimate goal would be 30 minutes each morning, but I often get overwhelmed when I think about doing that and it’s the first thing to go. Sometimes reading even one full chapter seems daunting. Recently I gave myself permission to think small. Just a verse or two per day. That I can do (and, consequently, I have the last few days). Does that mean I have failed? No! Am I where I want to be? Not yet, but it’s better than where I was. The focus, for me, is on getting better, incrementally, not perfection. 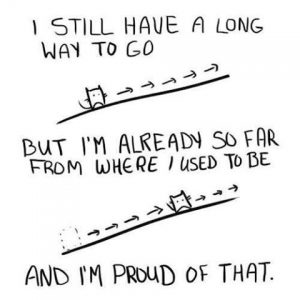 Perhaps this means I am still in the preparation stage for scripture reading, but I’m OK with that.

Think about a change you would like to make in your life. What stage are you at? Are you ready to move to the next level? What small goal can you set for yourself – so small, in fact, that you are guaranteed not to fail?